Unemployment rates (not seasonally adjusted) increased in 95 of North Carolina’s counties in June, decreased in four counties, and remained unchanged in one county.

Graham County had the highest unemployment rate at 12.3 percent while Buncombe County had the lowest at 4.7 percent. All fifteen of the state’s metro areas experienced rate increases. Among the Metro areas, Rocky Mount at 8.9 percent experienced the highest rate and Asheville had the lowest rate at 5.0 percent. The June not seasonally adjusted statewide rate was 6.1 percent.

The full release is available here.

Vance County has the fifth worst unemployment rate in the state with Graham, Scotland, Edgecombe and Wilson Counties respectively being the four counties with the worst rates. 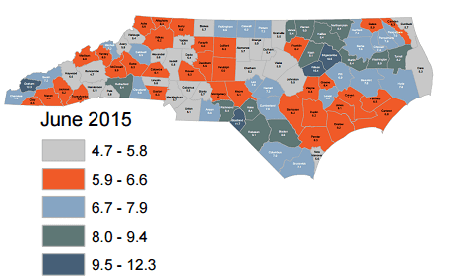